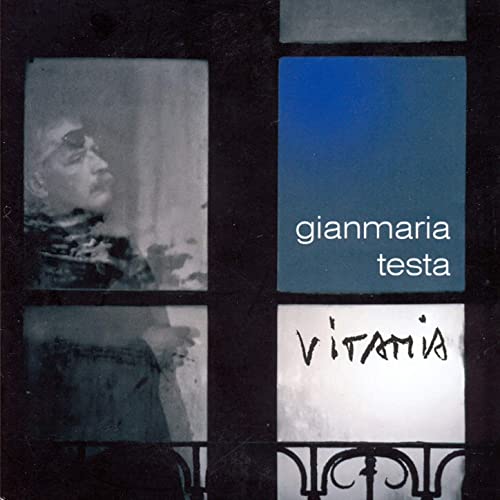 VITAMIA (“My Life”): Eleven tracks that embody personal and political reflections spanning some fifty years or “18 Thousands days” (to quote the title of one of the album’s songs). Like life itself, VITAMIA is a fresco of human emotions that draws on an immense diversity of musical colors and nuances.

VITAMIA may very well be the CD that you weren’t expecting from Gianmaria Testa—one in which musical settings and the sheer pleasure of making music play leading roles, with a pronounced and dramatic alternation between soft and loud dynamics.

A studio recording made in one week under “live” conditions, VITAMIA boasts a strong, close–knit group of musicians who are all longtime collaborators with Gianamaria Testa: on guitars, Claudio Dadone (who also arranged several tracks and assisted Gianmaria Testa and Paola Farinetti with artistic pre-production); Giancarlo Bianchetti, also on guitars; on double bass, Nicola Negrini; on percussion, Philippe Garcia; and on piano, Roberto Cipelli (who wrote the string arrangement for “Lele”). A select group of remarkable musical guests joins them: on violin, Mario Brunello (who serves up in the finale of “Lele” a genuine marvel, an Armenian sound both beguiling and gut–wrenching); on trombone, Gianluca Petrella (who offers freewheeling, imaginative variations in “Cordiali saluti” and more intimate and melodic ones in “Di niente, metà”); Luciano Biondini, who sprinkles his accordion magic onto three songs; and Carlo De Martini on viola and violin in the string trio of “Lele.”

There are striking new touches of no small importance in the context of Gianmaria Testa’s musical career: the use of electric guitars, including distortion effects; and the absence of wind instruments, with the exception of Petrella’s almost electric trombone.

Three overarching themes run through VITAMIA: the theme of childhood, present in “Aquadub” and “La Giostra”; a more social or political motif in “Cordiali saluti,” “Sottosopra,” and “20 mila leghe (in fondo al mare),” this last a kind of mini-opera that nonetheless recalls the disc’s childhood songs in its language and musical forms; and finally a more intimate and sentimental vein, the one most closely associated with Gianmaria, in “18 mila giorni,” “Di niente metà,” “Lasciami andare,” “Lele,” “Nuovo,” and “Dimestichezze d’amor.”

NUOVO is a fresh and sunny song dedicated by Gianmaria Testa to his youngest son, Nicola. A rock-blues cut, LASCIAMI ANDARE tells of the inadequacies of farewells under certain human and emotional circumstances.

LELE is a sad ballad, the story of a woman from the southern part of the world who decides to let herself die. DIMESTICHEZZE D’AMOR flirts with the fado genre and recounts the warm intimacy of an established love, one still open to surprise. CORDIALI SALUTI and SOTTOSOPRA are both from 18 Thousand Days—the Python, the show created by Gianmaria and the actor Giuseppe Battiston, though here they take on a completely new musical guise. “Cordiali saluti,” a sordid and saccharine letter of dismissal, glows with the energetic colors of funk, while “Sottosopra,” the song of a worker who stages a solitary rooftop protest, dips into the sound palette of industrial rock.

Between them come a childlike interlude, AQUADUB (with lyrics by Gianmaria Testa and music by Philippe Garcia), and 18 MILA GIORNI, a ballad that is a snapshot of the late twentieth century, dedicated by Gianmaria to the writer Erri De Luca. 20 MILA LEGHE (IN FONDO AL MARE) brings us back to the burning realities of our time in the form of a parable or one of Gianni Rodari’s fairy tales, with a musical divertissement whose finale showcases the immense virtuosity of all its musicians.

Rarefied and refined, DI NIENTE, METÀ acknowledges in a melancholy mood how, in this life “that burns your hands,” one can risk losing sight of what is essential — those things that, in the words of Saint-Exupéry’s The Little Prince, are “invisible to the eye”.

The last track, the surreal and imaginative LA GIOSTRA, is a kind of signature song for the album as a whole, which, deep down, tells a tale of carousels. The music ends with a crescendo, a joyous and startling little fanfare played by strings alone, with wind instruments surprisingly absent.

VITAMIA was produced by Paola Farinetti. It is distributed in Italy by Egea Records and in the rest of the world by Harmonia Mundi – Le Chant du monde.

Once a friend said to me, “Try to measure your life in days instead of years. You’ll see how it changes your perspective”. He was right: everything becomes briefer and smaller. A day is a minimal dimension, one that can almost be measured in breaths. Years, by contrast, are metaphysical spans of time — though they, too, are passing for me at the speed of light. In a sense, this disc should have been called18 mila giorni (18 Thousand Days),because that’s how old I was when I began thinking about it. But then there were 19 thousand days (and more), the material wasn’t ready, and I dropped the title

Instead, it’s called Vitamia (My Life), all one word, for several different reasons, including the fact that I make no claim to have summed anything up or established an on–the–fly balance sheet. There are notes about the past and the present and even a subdued and secular invocation of the future, one that does bear the title “18 mila giorni.” It is dedicated to Erri De Luca in brotherly love and because he, along with others, sought at some point to imagine a different future.

The album, then, came into being slowly. To be sure, this is no guarantee of success, though it did allow for a kind of conscious and, above all, shared sedimentation.

Because while a disc is always a collective adventure, it does not necessarily become something shared. But in this case, both in the pre–production work with Paola Farinetti and Claudio Dadone and in the rehearsals and recording studio, each individual musician made an important creative contribution, one that goes far beyond simple “playing.”

Seven of the eleven songs on Vitamia were written for the show 18 Thousand Days—the Python, in which Giuseppe Battiston and I staged a monologue by Andrea Bajani on the theme of work. This disc owes much to Giuseppe and Andrea, too, and to the show’s director, Alfonso Santagata. What’s more, the song “Cordiali saluti” was inspired by Bajani’s book of the same name.

Five years have gone by since my last disc of new songs, Da questa parte del mare — a long time, or so I’m told by those who deal in deadlines. I still believe that you make an album when you have something to say, to yourself most of all. In these last complicated years, I found it hard to write, overwhelmed as I was by a single, deafening question: WHY?